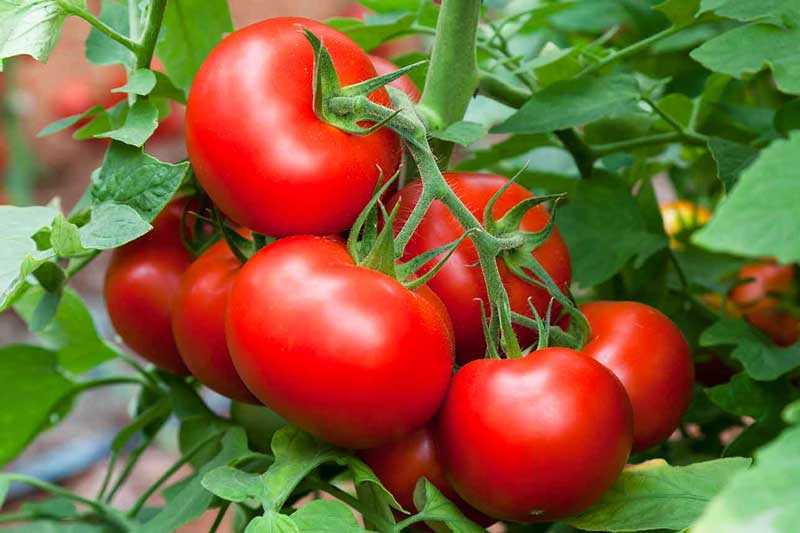 The tomato (see pronunciation) is the edible, often red, fruit/berry of the plant Solanum lycopersicum,[2] commonly known as a tomato plant. The plant belongs to the nightshade family, Solanaceae.[1] The species originated in western South America.[2][3] The Nahuatl (Aztec language) word tomatl gave rise to the Spanish word “tomate”, from which the English word tomato derived.[3][4] Its use as a cultivated food may have originated with the indigenous peoples of Mexico.[2][5] The Spanish discovered the tomato from their contact with the Aztec peoples during the Spanish colonization of the Americas, then brought it to Europe, and, from there, to other parts of the European colonized world during the 16th century.[2]

Tomato is consumed in diverse ways, including raw, as an ingredient in many dishes, sauces, salads, and drinks. While tomatoes are botanically berry-type fruits, they are considered culinary vegetables as an ingredient or side dish for savory meals.[3] Numerous varieties of tomato are widely grown in temperate climates across the world, with greenhouses allowing its production throughout the year. The plants typically grow to 1–3 meters (3–10 ft) in height and have a weak stem that sprawls.[2] It is a perennial in its native habitat, and cultivated as an annual. Fruit size varies according to cultivar, with a width range of 0.5–4 inches (1.3–10.2 cm).[2]

Next： What is the Difference Between Tomato Sauce and Ketchup